When you get right down to it, this is what it’s all about. We’ve experimented with lots of different ideas of how to make this work in the game; the ones involving moving cocktail sticks around the board are best forgotten! But, I think we’ve finally found something that works in a practical sense and that at the same time maintains the essence of what we were trying to achieve.

Bear with me here.

Imagine if you will, a planet with 9 asteroids orbiting around it. 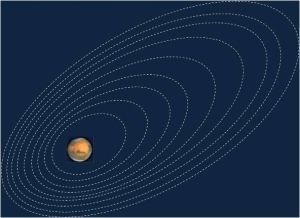 Now imagine that as time passes the asteroids get periodically closer and further away from the planet.

The asteroids on more distant orbits get close, but not very close, while the asteroids in nearer orbits are fairly close most of the time.

Finally, imagine that you take a snapshot of the asteroids every month and record how close they are to the planet. You might end up with something like the pictures below.

What we’ve done is split space near to the planet into 3 levels, close, medium and far orbit (the planet is the blue patch at the bottom in case you’re wondering). Asteroids in the bottom section are close to the planet and come around more often and are easy to get to, while asteroids in the medium and top sections come around less often and are harder to get to. The picture below shows the asteroids and where they are going to be positioned for the first 3 turns of the game.

I hope that makes sense to you (it looks a lot better on a full size board), and please post any questions or comments.

About the Author: Dave

Dave has been playing games since he figured out that you're not meant to eat the pieces! He lives in London with a very understanding wife, who occasionally agrees to playtest the new ideas and models he churns out.