It’s not all about designing games around here, we rather enjoy playing them too. Recently I’ve been having a go at David Braben’s Elite: Dangerous. This isn’t a review as such, but rather a reflection on the game and my experience of it so far. Why ‘so far’? Because I already know I’ll be spending quite a bit of time in this game, despite some of its limitations.

For the uninitiated Elite is a classic, nay, seminal 3D computer game. Written in 1982 Elite opened up a challenging and dangerous universe which allowed wannabe pilots to fight, trade, and explore across the galaxy. The premise is simple, you’re given a ship, a few credits, and away you go to make your fortune however you wish. With those credits you can buy bigger and better ships and refit those ships with exotic equipment sourced from across known space. Oh, not to mention the many ships who would attack you along the way.

Three decades later Elite is back. The technology available to computer game designers has changed significantly over that period and the new game reflects this. Elite: Dangerous uses a procedurally generated persistent universe which is gorgeously rendered in 3D and packed full of other players from across the world. As of the most recent update (1.2 at time of writing) its easy to chat with your friends and other players in the same system.

Here’s a screenshot from earlier this week. I was minding my own business when I saw a pair of very large ships squaring off outside a station. I hung around to watch for a while and even followed them around for a bit. It wasn’t long before CMDR DC noticed me however and I fled into Hyperspace surrounded by a hail of laser beams. Exciting stuff as weapons that size can take me out completely in a couple of hits! 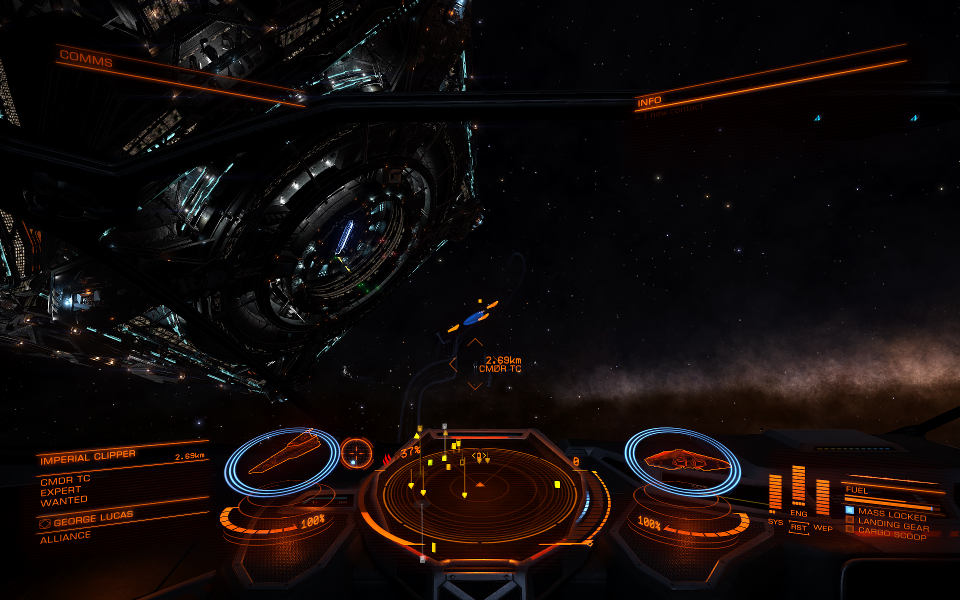 Elite is a game still in development, and I look forward to seeing how it evolves over the coming weeks and months.

‘But what about Periorbis?’ I hear you cry! Have no fear the budding space traders among you will soon have your day. Watch out for an update coming your way soon.

About the Author: Gareth

Gareth is the techy member of the team, which doesn't necessarily say as much about him as it does about the other members of our team... He lives and works in London and plays as many games as he can get away with.