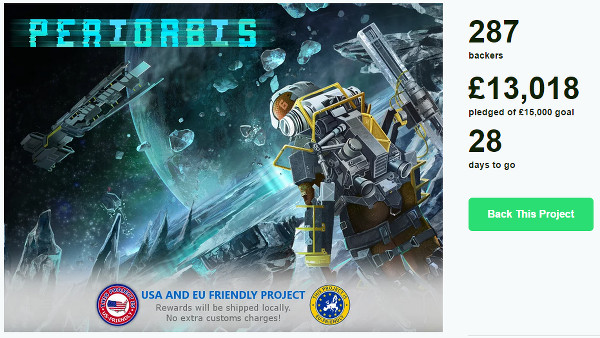 Caught a little unprepared. (or how it feels to launch a Kickstarter campaign)

Unprepared in a good way mind! Just now a notification has popped up on my phone to announce that Periorbis has raised £13,000 ($19,380) in less than two days on Kickstarter.

I like Periorbis. The confidence and enthusiasm of the (international!) team we’ve developed and playtested it with is beyond question, and our reviewers and previewers love it. Because of all that, you’d think it would be easy to be confident in the belief that our audience would like it too, but we just didn’t know, couldn’t know how people would react.

And now we do.

It’s already been the most amazing experience. We switched on the campaign at 8.00pm BST from my home in South East London. It was a pretty quiet affair. A couple of clicks on the Kickstarter website and an email confirmation that the project was live.

The next thing on the list was to get on with the business of telling people about it. Simple enough, open tabs for Twitter, Google+, my Facebook, and our company Facebook page and start posting messages and links about the new campaign.

While all that was happening I was wondering how long it would be before the first person noticed and backed the campaign. This sort of speculating is inevitable and a lot of fun too. For us it’s a day very much like any other, the main job being to sit at my desk working on something that has been my primary activity outside of work and family for about two years.

We’ve lived and breathed Periorbis, refining and improving David’s initial design, the economic model, and the layout. Now we are seeing other people express an interest. Did they see a tweet, a comment on a forum perhaps. Did someone mention it at work? Had they backed the first campaign or watched one of the review videos on Youtube?

With the first round of social media updates and emails out of the way we opened the campaign page to see if Periorbis had been backed.

Looking at the numbers we realised that our early bird pledges weren’t going to last a couple of days, they were going to last a couple of hours. We talked this over excitedly on Skype. We wanted to provide more opportunities for those who joined the campaign early, but didn’t want to devalue the effort of those who’d secured an early bird pledge.

It’s tough to describe the thrill of having a live campaign. It’s a bit like having a secret. You go about your life, but in the background you are wondering what people are saying about your game, whether or not they are backing it, whether they will like they way you’ve structured the pledge levels. A thousand different things all at once.

About the Author: Gareth

Gareth is the techy member of the team, which doesn't necessarily say as much about him as it does about the other members of our team... He lives and works in London and plays as many games as he can get away with.